Indian Poultry Industry is already suffering heavily due to sharp drop in poultry production due to scratching heat wave across the country. Margins of India's poultry industry are further expected to contract sharply due to high input costs. Prices of soybean and maize, the two key inputs that are used as livestock feed in the poultry industry, are rising sharply due to the conflict between Russia and Ukraine.

The main driver of rising feed costs has been soybean. As we know Feed accounts for over 70% of in poultry production of which and maize forms 60-63% of the feed while soy meal forms 25-27%. India imports de-oiled cake — which is used in chicken feed. But imports from Ukraine have stopped due to the conflict with Russia, which is why prices have again started shooting up. Even though corn is produced in abundance in India, prices have shot up. This is because, Ukraine is not exporting corn to the rest of the world right now, and other countries have turned to India for their demand. With demand for Indian corn shooting up, prices have increased which has had an impact on corn feed too, another item that is used to feed chickens. Growing export of Indian corn has led to farm gate price of corn to rise from Rs 19.50 per kg to Rs 22 per kg.

Chicken prices have also gone up 25% since January and industry experts expect a further increase of 10% to 50% in different parts of the country in March and April due to acute shortage of feed.

Consumers will also have to brace for unprecedented rise in prices of animal protein. 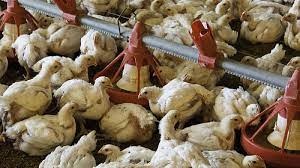