View All News
National Egg Coordination Committee (NECC) appeal to the Government of India to allot damaged Wheat, Paddy and Broken Rice - unfit for human consumption - for use in poultry feed to tide over the cri

National Egg Coordination Committee (NECC) has appealed to the Government of India to allot at least 2.0 million tons of damaged Wheat, Paddy and/or Broken Rice - unfit for human consumption - for use in poultry feed, as a partial substitute for maize so as to enable the farmers to tide over the unprecedented crisis caused due to acute shortage and steep increase in the price of maize and soya meal in the domestic market. It's one of the worst crisis in the History of the Poultry Industry. NECC sources said that during the past few years, and particularly during the past one year, there was a significant increase in the price of Maize due to various reasons beyond the control of farmers, such as increased volume of exports and diversion of significant volumes of maize for production of bio-fuel in Bihar, which is a major maize-producing State.

NECC has stated that due to such increase in maize price, the average cost of production has gone up from Rs.4.00 per egg last year, to Rs.4.75 - Rs.5.00 presently. However, average farm gate price is hovering around Rs.3.50 per egg. thus resulting in a net loss of Rs. 1.50 to 1.75 per egg for the farmers. Unable to withstand such continuous losses, thousands of small and marginal farmers, and even breeders have already shut down or suspended or scaled down their operations. Most of the farmers and breeders are on the verge of insolvency.

Under these circumstances’ partial substitution of maize with other cheaper commodities is the only viable option to help the farmers to retain their means of livelihood, as well as to ensure that eggs and chicken would continue to be available to the poorer sections of the consumers at an affordable price. NECC sources said - "we are hopeful that the Government would respond favorably to our appeal and come to the rescue of farmers and allot the damaged grains for production of poultry feed, and enable the farmers to tide over the crisis and continue to retain their only means of Livelihood" 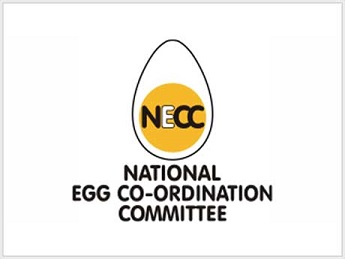