India today is one of the world's largest producer of eggs and broiler meat. The poultry industry in India has undergone a major shift in structure and operation during the last two decades transforming from a mere backyard activity into a major industry with the presence of a large number of integrated players.This transformation has involved a sizeable investment in breeding, hatching, rearing and processing activities.

Some of the key drivers for the estimated growth of  15 percent for poultry industry in India are:

Increasing Incomes Coupled by Changing Food Habits: Broiler meat in the past had been considered to be a delicacy but as a result of increasing levels of urbanization and higher levels of disposable incomes, poultry meat is increasingly seen as less of a luxury product and more as a daily staple. Further with changing food habits and increasing exposure to global cuisines, the Indian population is increasingly converting to a non-vegetarian diet. Poultry meat is preferred over other meat products as it is considered more hygienic and is available throughout the year across the country at relatively lesser prices than fish and mutton.

The annual per capita consumption of broiler meat and eggs remains one of the lowest in the world and is significantly lower than many emerging and developed markets. As a result of the low penetration levels and continuously increasing income levels, however it is expected that per capita consumption of both broiler meat and eggs to increase continuously during the next five years.

Growth in the Food Services Market: Growth in the food services market such as restaurant and fast food joints are also creating a positive impact on the consumption of broiler meat and eggs. Both broiler meats as well as eggs represent important ingredients in both traditional Indian non-vegetarian recipes as well as fast foods. 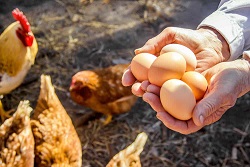