View All News
Kerala is self sufficient in Chicken production but still there is a scope for Growing business prospects in Layer Industry to fill the huge gap between demand and supply.

Growing business prospects and an increase in domestic consumption seem to have helped Kerala reducing its dependence on neighboring Tamil Nadu and Andhra Pradesh for Egg and chicken. God’s own country is now inching towards self-sufficiency in poultry meat and egg production, thanks to more people venturing into Poultry farming.

For Chicken almost 80 per cent of the poultry meat in the Kerala has been met from farms within the State and the growth in domestic production has considerably reduced chicken arrivals from neighboring states. The main reason for growth in poultry farming is the entry of integrators, low investments, minimal area to set up ventures, and self-employment finance options from banks available in the state.

It is encouraging to note that with a demand of over 60 lakh kg of chicken in a week, Keralites are spending nearly ₹ 4,000 crore on poultry meat.

The scope in Kerala for egg production is still encouraging, as despite efforts of KEPCO to increase the production in the past five years and a rise of around 75 crore eggs still nearly 1 crore eggs per day are being imported from other states.

There fore Looking for a business proposition for poultry in Kerala, the best bet would be to engage in layer business as there is monthly shortage of close to 30 crore eggs. At present this gap is being filled by arrivals from other southern states.

There is monthly domestic consumption of around 45 crore eggs in the state and of these the domestic production is only around 20 crore, leaving a huge gap between demand and supply.

Kepco to put pedals to further increase the production of eggs in Kerala has now taken up the distribution of chicks belonging to breed of B.V.380 which is capable of laying 300 eggs a year.This particular breed also has been found to withstand health issues and after it is done with laying eggs, each bird has a weight of more than 2 kg.

Kepco of late has also joined hands with the Local Self Government and is giving cages and chicks to interested farmers and expects to further narrow the gap of consumption and import of eggs from other states. 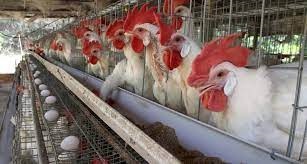